The Story of Omar Mukhtar, the Man Who History Remembers as Lion of the Desert

The turn of the twentieth century heralded a new era of domination, sequential conquests and ideological regimes by the occidental colonial powers over the weak and crumbling Muslim masses.

During the war between Italy and the Ottoman administration in 1911, the Italian government issued an ultimatum to the sovereign state of Libya – demanding for them to subscribe to a list of reforms within just twenty four hours or risk being invaded by the Italian forces the following day. Italy’s plans were already drawn, leaving the Libyan population with no real options left to take, an army of three hundred thousand soldiers had already been dispatched towards Libya.

In October 1911, Libya would suffer the arrival of Admiral Luigi Faravelli’s forces following the ultimatum issued a day earlier. With the subsequent withdrawal of the Ottoman soldiers from the region, there remained no organized troops or governors to defend the honour and reclaim the rights of the Libyan people.

But it is in the darkest of hours, that the brightest stars shine forth and re-align the travelers upon the path to victory and success. It is often said that in history, great men and women are often remembered – but legends are never forgotten.

There lies a trace of great beginnings from within the small village of Zawiyat Zanzur. Here in the serene settings of traditional and rural Libya was the commencement of hope and resistance, concealed in the unfolding mind of a child by the name of Omar son of Mukhtar of the tribe of Menfi.

Though the exact date is disputed, it is agreed that he was born around the year 1862. While on the way to perform the great pilgrimage in Makkah, Mukhtar Al-Menfi died resulting in the orphan-hood of his two young sons, Muhammad and Omar.

An orphan like so many men and women of stature of greatness in history, the young child was adopted by a Sheikh to whom his father had entrusted him before setting off on his final journey.

Omar Mukhtar was very observant and dedicated to practicing the commands of the faith, noted for observing his five daily prayers in congregation throughout his life and for being a memorizer of the Glorious Quran from a very early age.

Omar Mukhtar grew up under the watchful eye of his spiritual mentor, spending his pre-pubescent years studying at the local religious seminaries before graduation from the south eastern University of Jaghbub, following eight years of advanced studies in the religious disciplines. As he grew in years and understanding, so too did his desire and commitment to teach and instruct others. Omar Mukhtar became an instructor specializing in the teaching of the Noble Quran. His reputation at the university reached the ears of some prominent elders who then appointed him to serve as a Sheikh and instructor in Sudan, his appointment there would last several years.

Committed to the education and enlightenment of his people, be they in Libya or in Sudan, the wise and profound teachings of Sheikh Omar Mukhtar enveloped both the inward realms of spiritual ascent and the outward realities resulting from war and transgression, inflicted by the Italian forces.

His first military engagement was in Chad, where he participated in a battle against the French colonial powers in the region of Wadai. His courage and valor drew much attention and admiration from the senior fighters on the battlefield and it was once said by Muhammad Al-Mahdi - one of the leading Sheikhs of the Sanusi brotherhood - that all the Muslims needed were ten people like Omar Mukhtar, for victory to be attained.

This high compliment contributed to Omar Mukhtar’s appointment to the post of Sheikh in the region of Jabal al-Akhdara, a green and mountainous region buried deep within the Libyan hinterland.

The tribes and inhabitants of that region were notorious for their unruly demeanor, stubborn ignorance and were especially characterized by their weak adherence to religion. However the wise and kind mannerism and leadership of Omar Mukhtar was sufficient incentive to tame and cultivate virtuous traits in this most disorderly bunch. Such was the success and accomplishment of the sheikh that the Ottoman administration sent words of compliment and appreciation to Omar Mukhtar in acknowledgement of his pastoral activities.

Upon his return from his many years in the religious institutes of Sudan and his military participation in the defense of Chad, Sheikh Omar Mukhtar came to know of the Italian army’s arrival in Tripoli.

The tribes and clans grew desperate for help as the Italian troops began to sweep inland being confronted with little to no resistance from the inhabitants.

The population was without help or support ever since the Ottoman administration retreated and removed its forces from the region, furthermore the small militia who were present and willing to fight were still without the guidance of a single commander. The situation was dire and the consequences would be severe.

Despite being primarily trained at traditional seminaries and later on at university, the reluctant warrior soon emerged from within his deepest desire to defend and protect his land, its people and most importantly – the faith.

It was while on his way back to his old mosque that Sheikh Omar Mukhtar made the resolve to lead his people out of the tightening grip of tyranny by gath- ering and organizing small detachments of volunteer fighters from the indigenous tribes and clans.

At a time when the Italian forces were considered by some Libyans - as being almost undefeatable, Omar Al-Mukhtar prove them wrong by successfully and repeatedly frustrating the colonial army’s movements, operations and strategies through ambush, skirmishes and by disrupting critical supply routes to the armies.

The resistance effort brought forth by Omar Mukhtar and his fighters was able to keep the Italians weary and worried for the best part of twenty two years – proving that a small group of warriors could reign supreme over the most sophisticated military outfit of its day, by virtue of faith, wisdom and courage.

“How many a small company has overcome a large company by permission of Allah, and Allah is with the patient”
Surah Al-Baqarah, Quran [2:249]

As the twin burdens of defeat and humiliation began to weigh heavy upon the Italian administrators in Libya – having been defied and repeatedly so, at the hands of no more than two thousand volunteer fighters under the capable leadership and command of a teacher by training, the Italians resolved to draw up and agree a peace treaty with Omar Mukhtar, however the agreements were not in good faith and so resulting in the dissolution of all contracted terms between the two camps shortly thereafter.

Omar Mukhtar subsequently returned to his defense strategy by recruiting more fighters and unifying the ranks among several other factions in preparation for a decisive confrontation with the Italian General, Rodolfo Graziani, in the year 1930.

The Libyan people suffered immensely during the twenty month oppressive rule of General Rodolfo and his army. In this short period of time several civilians were killed, on average thirty executions were ordered on a daily basis and women were routinely kidnapped from their tribes and brutally raped. Graziani also ordered for the gruesome murder of fifteen tribal elders by having them pushed out of flying aircrafts, one by one.

Sheikh Omar Mukhtar maintained a very high standard of moral integrity when his men seized prisoners from among the Italian troops. On one such occasion the lives of some soldiers were spared on the command of Omar Mukhtar however some of the Libyan fighters objected on the grounds that the Italians were not hesitant in killing Libyan prisoners of war, not satisfied with mere revenge and blind imitation of the enemy Sheikh Omar Mukhtar responded by saying that the Italians were not teachers whose example should be followed by true Muslims.

On September 11th 1931 the resistance was struck by a severe blow as Omar Mukhtar and a group of forty fighters were subject to an ambush during an expedition, the Italians were able to surprise Omar Mukhtar by intercepting some intelligence about his location with the help and complicity of local collaborators and informants. Sheikh Omar Mukhtar was finally in the custody of the Italians. General Rodolfo Graziani had his man right where he wanted him, a prized prisoner and substantial proof that the Italian forces had finally broken the resistance movement.

As the final hour drew closer in the final chapter of Omar Mukhtar’s outstanding life – courage and dignity were not in short supply and although his captors had been able to wrap his hands and feet in iron chains, they were entirely defeated and overcome by the Sheikh’s noble composure and admirable spirit in the face of adversity and the threat of imminent death.

He was tried and convicted over the period of three days, after which the death penalty was pronounced in court. At last, after more than twenty years of struggle and resistance in the name of the faith and in the spirit of his people, after over one thousand battles, confrontations and skirmishes against an adversary who’s army numbered more than one third of a million against a small militia of less than two thousand volunteer fighters – finally, the hour had arrived and there stood Sheikh Omar Mukhtar as his oppressors asked him whether he would like to impart any final words following the decisive verdict from the court, Sheikh Omar Mukhtar recited the following verse from the Noble Quran.

“Verily to Allah we belong and verily to Him we shall return”
[Quran, Surah al Baqarah, Chapter 2, Verse 156]

Omar Mukhtar was brought to the gallows before his people on September the 16th 1931 and hung in plain sight for all to see. In the final moments of his life, as he stood before large multitudes of his people, bound by the oppressor but forever free of spirit, Sheikh Omar Mukhtar continued to recite the call to prayer and uttered words of remembrance that would be concluded with his recitation of the following verses from the book of God.

“[and it shall be said onto the righteous soul after death] Oh Tranquil soul, return (home) towards your Lord well- pleased and well-pleasing to Him. Thereafter enter amongst My (righteous) Servants and enter into My Paradise”
[Surah Al-Fajr, Chapter 89, Verses 27-30] 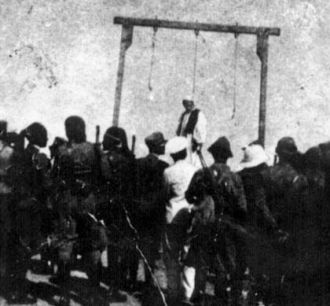 Below are excerpts of a poem by the great Omar Mukhtar (translated from Arabic):