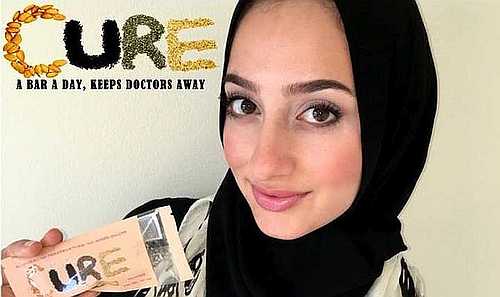 Zobaida Falah is a 26 years old Muslim woman from Toledo, Ohio. She is the founder of CURE M, a nutritional company that makes healthy snack bars inspired from the hadith of prophet Muhammad (peace be upon him):

“This black seed is a cure for every disease except death.”

She says that one hadith of prophet Muhammad (pbuh) has touched her heart profoundly “Feed the hungry, visit the sick and free the captive” and is one of the reasons why she donates one bar for every one she sells. She believes that this simple act of giving can have an impact on the world.

Zobaida says that entrepreneurship is a passion she had since her early age: at 8 years old she was selling pencils to kids at her class. As she grew up and became more aware of her religion she researched the Hijab and chose to wear it at age 15.

Zobaida is working towards her goal of having her cure bar available in vending machines, gas station. schools, grocery stores, airports, etc. She wants to give people an alternative to the junk food that’s poisoning their health. Her story has been featured on many respected media outlets including Aljazeera.

You can buy CURE Bars on Amazon: