When asked about healthy eating in a recent interview with MBC channel, famous Martial Arts professional and action movies star Jean-Claude Van Damme told the reporter that prophet Muhammad knew what’s good for the body and that people should read about that.

Van Damme’s quote about prophet Muhammad (pbuh) was part of his answer to the reporter’s question about supplements that the youth are taking these days. To which the actor replied “Steroids, very bad. Kidney, liver failure.. Very very bad. Vitamins, good. But you have to know your blood type …”.

He then started going into details about blood types and other stuff before realizing it was too much complicated and to keep it simple he said “You eat good, you sleep good. If you eat meat and chicken, maybe once a week… But I’m saying even meat, not too much eating meat. Not good. Once a week maybe maximum. And then vegetables, hummus. All good Arabic food. Middle-East. Like in the old times. Like in the Muslim era. Look at the Muslims. Bread, almond, apple… Go read, you’ll discover the Muslims ate lots of good things. The very smart Prophet Muhammad (pbuh). He knew what’s good for the future and for the body. So look at that. Don’t ask me and, believe me, you have everything there.” 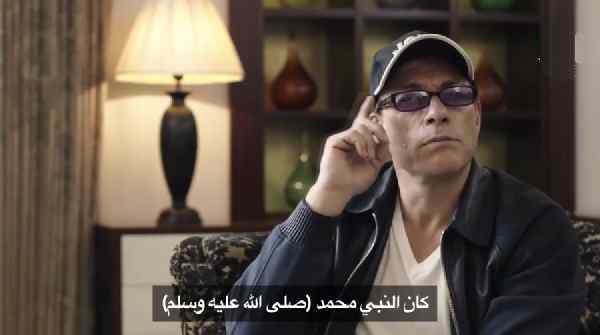 The very smart Prophet Muhammad (PBUH). He knew what’s good for the future and for the body. So look at that. Don’t ask me and, believe me, you have everything there.